I need a new kidney

Doctors have recommended that he received two rounds of dialysis per week, but he has only been able to do one per week due to the shortage of funds.

Everett, a labourer, said that he has exhausted his savings on dialysis since his diagnosis.

Doctors have recommended that he received two rounds of dialysis per week, but he has only been able to do one per week due to the shortage of funds. A course of dialysis costs Everett $15,000, which is significantly lower than the $25,000 that is charged by most medical centres.

“Even with the $15,000 for one treatment, for me to come up with $30,000 per week for the two treatments the doctors at KPH ordered, and to find money for special diet without a source of income is causing me to be more sick,” the 40-year-old Everett said.

Chronic renal failure is a significant public health problem in Jamaica, and has placed increasing financial burden on the healthcare sector, and on patients in the low-income bracket to access care.

In 2019, Health and Wellness Minister Dr Christopher Tufton told Parliament that approximately 150,000 Jamaicans are afflicted by some form of kidney disease. He said that persons who require dialysis — and are forced to seek treatment in the private sector — are paying up to $80,000 per week for the procedure.

Everett said that his illness has made it impossible for him to work as he has a catheter attached to my chest.

“I don’t have nobody to help me, all my savings gone, there is family, but no family. I have to rely on friends for help now, and I don’t know how long this will continue,” Everett added.

Dr Everard Barton, professor emeritus of nephrology at The University of the West Indies, said that the cost for dialysis is out of the reach of low-income Jamaican.

With Everett being unable to afford dialysis, his next best option would be to have a kidney transplant done. That, too, has its challenges.

“I would prefer to get a transplant, but I don’t have nobody to give me a kidney. I am begging anyone out there who can give me a kidney to help me out, please,” Everett pleaded.

Professor Baron, who founded the Caribbean Institute of Nephrology, told THE STAR that Jamaica has been doing well with kidney transplants since the first one was performed in 1970. According to him, five procedures were performed in 2019 and another four were done in 2020, before the pandemic.

If Everett is unsuccessful in getting a donor, he will have to be on the waiting list for a matching kidney from a person who has agreed to donate the organ before they became brain dead.

Professor Barton said that there are a lot of challenges in obtaining organs for a person who give consent before they became brain dead, as oftentimes family members are unwilling to follow through with the request of their deceased loved ones.

Everett is hoping that some form of help will come his way as he continues to struggle with kidney disease. 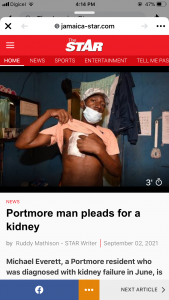 About the campaign creator

There are no reviews yet.

This site uses Akismet to reduce spam. Learn how your comment data is processed.